The Melbourne-based philanthropic Gordon Darling Foundation has kindly provided a grant to support the research and development phase of Black Mist Burnt Country. It will enable Burrinja Curator JD Mittmann to travel to Yalata, South Australia, to meet and consult the traditional owners of Maralinga. 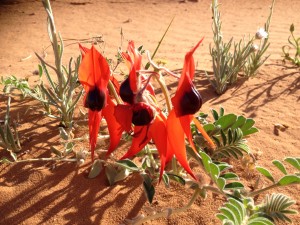 The Anangu were removed to their current location at Yalata, near Fowlers Bay from United Aborigines Mission Station in Ooldea in the early 1950s to make way for the atomic tests at Emu and Maralinga.

The traumatic dislocation of Anangu from the long-running United Aborigines Mission is well documented in Christobel Mattingley’s book Maralinga – The Anangu Story (2009) as well as accounts of the atomic tests and its effects on the Aboriginal people of the Great Victoria Desert.

Accounts of the forced removal and insufficient government attempts to locate any other free-roaming families in the vast one million square area designated for Woomera rocket testing and British atomic tests were also documented at the hearings of the Royal Commission into the British Nuclear Tests in Australia (1985).