August 6 is known as Hiroshima Day, and this year it marked the 70th anniversary of the atomic bombing of Hiroshima. Quite a number of media reports covered the event and its aftermath, including ABC Hobart, which presented a moving interview with author and Hiroshima survivor Junko Morimoto who has been living in Australia since 1982. 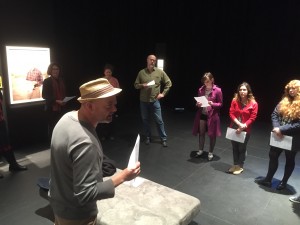 The story of the hibakusha (atomic bomb survivors) was also focus of the opening session of the Nuclear Futures Seminar at The Block, which included an impromptu reading of a section of the play “Grandchildren of Hiroshima” by Misaki Setoyma. The reading was part of a world-wide theatre project by London Bubble Theatre and held simultaneously around the world. The script was adapted for shared reading by Jonathan Petherbridge. Presenters of the Seminar and half dozen QUT drama students read the script – which was quite a chilling experience.