Curator JD Mittmann has returned from another visit to Yalata to meet with community elders and managers to present an overview of the planned exhibition and its touring itinerary. In the meantime PM Tony Abbott was ousted and Malcom Turnbull has become Australia’s new prime minister. A new cabinet was sworn in on Monday. As a result George Brandis has lost his arts portfolio and has been replaced by Victorian Senator Mitch Fifield who also takes on the Communications portfolio. 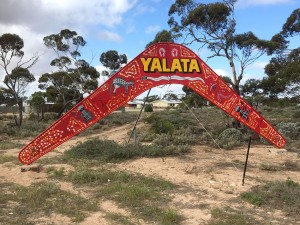 It remains to be seen whether substantial budget cuts to Australia Council and the controversial National Program for Excellence in the Arts (NPEA) initiated by Mr Brandis will be dropped and reversed.  Sarah Moynihan spokesperson for the alliance Free the Arts, which has been campaigning against the recent changes said in a statement: ‘The change of Minister provides the government with the opportunity to fix the mess created by his predecessor before more damage is done and we look forward to working closely with the new Minister.”

The team at Burrinja is closely watching. “Either way, we are working toward submitting the final application for Visions of Australia touring funding at the end of the year”, says JD Mittmann. “The development of the exhibition is making good progress. Most venues, artists and artworks have been confirmed and other elements of the exhibition are in development.” Mr Mittmann is confident that a comprehensive application for the funding of the touring exhibition will be submitted by the end of the year, in time for the planned launch in September 2016 at National Trust SH Ervin Gallery in Sydney, which will mark the 60th anniversary of the first British test at Maralinga.

Visions of Australia program transferred to the Ministry for the Arts

The long legacy of the Woomera Rocket Range
Scroll to top