The long legacy of the Woomera Rocket Range

On 15 and 27 October 1953 the British conducted the first land-based atomic tests in Australia, at Emu also known as Emu Field or Emu Junction, a large clay pan, 300 km east of Cooper Pedy. The name stems from a footprint that was spotted in the dried out surface when British top brass arrived for the first time to inspect the site.

Surveyor and road maker Len Beadell (1923-1995) had chosen it because the clay pan provided a firm surface for planes to land on. Beadell had been responsible for a number of tracks that had been cut across the arid regions of South and Western Australia as part of the Woomera rocket range development project when he was requested to find a suitable site for atomic tests.

Woomera had been established as a joint weapons research facility between Britain and Australia in 1947. The range is still the world’s largest land-based weapons test range, which covered an area of 270,000 square kilometres (the size of England) at its peak. To the present day defense and aerospace projects are carried out there, although on much smaller scale. Only 300 permanent residents live in Woomera these days, which was once buzzing with military and civilian personnel. Trend: declining. 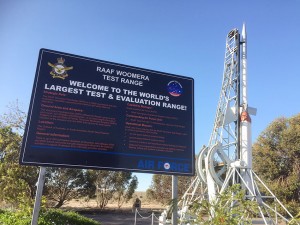 Woomera became also synonymous with hardline border protection and refugee protests. Its immigration and reception and processing centre, so the official title, was established in 1999 under the prime ministership of John Howard. It functioned as an overflow facility with an initial capacity of 400 but soon housed as many as 1500 adults and children. In 2000 it made news when detainees protested against living conditions with riots and self-mutilations. The facility was closed in 2003.

The Woomera Heritage Centre in the town centre exhibits rockets, planes and other military objects, and its indoor displays provide an insight in the legacy of military and aeronautical projects. These were not without impact on the Aboriginal people in the region. As far as North-West Western Australia habitants of the central deserts were forced of their traditional lands as a precaution to Blue Streak Rockets and other experiments, including the atomic tests at Emu.

Many Pitjantjatjara were moved from the lands to remote places as far as the Bathurst Island of the north coast of Australia. A reserve was established across the transcontinental railway with the Yalata township to make way for the atomic tests at Maralinga. The long-running United Aborigines Mission station at Ooldea was closed.

Len Beadell and the atomic tests at Emu
Scroll to top