Len Beadell and the atomic tests at Emu

Among 4WD enthusiasts Len Beadell is known as the ‘last true explorer’. A memorial at Woomera cemetery commemorates him as “explorer surveyor roadmaker” who “opened up the outback to all people”.

The Anne Beadell Highway, which runs East to West from Marble Station, 50 km east of Cooper Pedy, to Laverton in Western Australia, was named by Beadell after his wife. Perhaps a small token for the lengthy absences she had to endure when her husband had ‘gone bush’ for road building projects. Highway is an apparent exaggeration, as it no more than a narrow one-lane corrugated bush track. It is hard to imagine that this was once the only access road to the atomic test site at Emu. 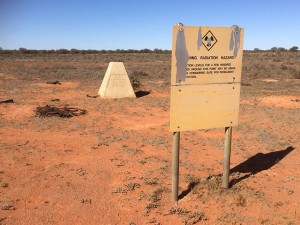 Len Beadell described the development of Emu, the preparations for the tests and the subsequent search for a permanent site in his book Blast the Bush (1967), one of several which chronicle his achievements and those of his construction party in establishing a road network across the outback.

Two tests were conducted at Emu in October 1953, Totem 1 and eleven on 15 and 27 October with yields equivalent to 9 and 7 kilotons TNT respectively. In comparison: the Hiroshima bomb ‘Little Boy’ yielded 16 kilotons. Only three days after the later test the Australian government was advised that the British wished to establish a permanent test site, which the Australian government cabinet approved in August 1954.

The two sites are easily accessible these days, with required permits from the Department of Defence and the Traditional Owners: Maralinga Tjarutja. Two concrete commemorative cairns mark ground zero, but don’t have much else to show for.

Apart from some rusted pieces of metal previous visitors have collected and piled up near the cairns not much is evident of its explosive history; a twisted rail track, some bent 3-inch thick iron bolts and bits of molten rock indicate the destructive force of the blast. The vegetation around Emu is sparse and low with occasional stumps of mulga, and looks like it has not recovered in 60 years since intense heat and shockwave caused by the atomic bombs destroyed it.

The long legacy of the Woomera Rocket Range