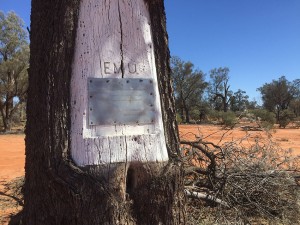 Emu proved not a suitable site for the lack of water, its remoteness, and the difficult access to it.

So he extended his survey to country to the south, closer to the transcontinental railway. The country is marked by and sheer endless number of sand dunes some as much as 20 metres high, with mulga, sheoaks in the valleys between. Beadell described the arduous task of cutting a way through the bush with his land rover, experiencing numerous punctures and needing sometimes dozens of attempts to climb these enormous sand dunes in his book ‘Blasting the Bush’. It is the story of the establishment of Emu, where Beadell experienced the first atomic test, and the search for a new permanent location the British required for the following test program.

Eventually, after crossing over numerous dunes and mending plenty of tyres,s Beadell reached the Oodlea Ranges, where Maralinga village was established.
He cut a 200-kilometer track from Emu straight south to Maralinga, which is marked by two aluminum plates he mounted on Observatory Hill and on a tree at halfway mark. These state the date and latitude-longitude coordinates. 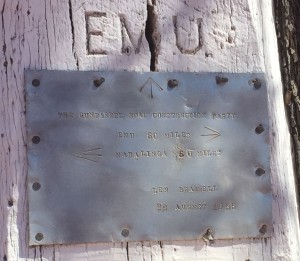 Later in his life Len Beadell, who published a number of books about his time in the bush, was rightly criticised for ignoring local Aboriginal people, their knowledge of the country and the existence of sacred sites while constructing a network of roads on their traditional lands. His role in establishing the sites for rocket and atomic testing at Woomera, Emu and Maralinga was elementary.

The achievement of establishing a road network spanning thousands of kilometres across the central deserts in the 1950s with a land rover, a grader and a small support team demands respect nevertheless. Anyone who has been on those tracks might attest.

Len Beadell and the atomic tests at Emu