Black Mist Burnt Country was launched in the First Australians Gallery at the National Museum in Canberra yesterday in the presence of over eighty distinguished guests, including ambassadors, artists, community leaders, government stakeholders and museum staff.

Among the attendees were His Excellency Dr Bernhard Zimburg, the Austrian Ambassador to Australia, the ambassadors of Timor-Leste and Italy, as well as academic staff from the Australian National University and governmental staff, of the Departments of Science and Innovation, Foreign Affairs and Trade. 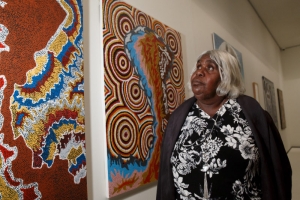 In a moving speech board director, Yalata Anangu Aboriginal Corporation Mima Smart told of the effects the community felt being removed from their lands and being exposed to radiation. “The bomb is still hurting us,” she said.

National Museum Director Mat Trinca acknowledged the importance of telling uneasy stories of national significance, while the Indigenous Advisor to the Director and MC at the launch, Margo Neale, emphasised the fact that a small institutions like Burrinja deserved respect for producing a big project such as this touring exhibition.

Curator JD Mittmann reminded the audience that while the nuclear threat is continuing a treaty to prohibit nuclear weapons is awaiting signing and ratification at the United Nations.

The exhibition is on display until 18 November. Entry is free.