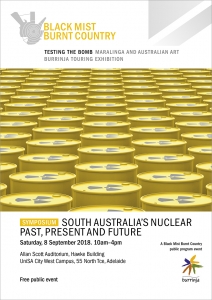 Several BMBC artists including Prof Ian Howard, Merilyn Fairskye, Adam Norton and Karen Standke commenced the 1250km long road trip from Adelaide to visit the former British atomic test site at Maralinga. Led by  exhibition curator JD Mittmann the trip entails a guided tour of the former ‘forward area’, the airstrip and Maralinga Village which at the height of the program housed 2000 army personnel and scientists.

Planned along the way are also stops in Kimba on the Eyre Peninsula and Hawker in the Flinders Ranges where the Federal Government has marked sites for the proposed storage nuclear waste. The artists will meet with community members, farmers and traditional owners.