In the last week exhibition curator JD Mittmann took a group including BMBC artists Merilyn Fairskye, Ian Howard, Adam Norton and Karen Standke on a tour to South Australia to visit the former atomic test site at Maralinga. Former Maralinga caretaker Robin Matthews provided a guided tour which set out from Maralinga village, visited the former arrival hall at the airport and the 2,5 km long airfield. They went on to the ‘forward area’ 25 km to the North of Maralinga village. 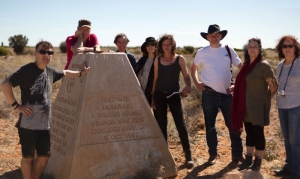 The test site, an area of 300 sqkm was the stage for seven mayor ‘mushroom cloud’ tests and several hundred so called ‘minor trials’ from 1956 to 1963. More information about the history of the test program can be found in our Resources/History section and theconversation.com.

The artists visited Yalata Aboriginal community where they met with community leaders at the recently renovated Women’s Centre and visited the new founded Youth Hub.

The group also stopped over in the towns of Woomera, Kimba on the Eyre Peninsula and Hawker in the Flinders Ranges, the later two being the proposed sites for a national nuclear waste facility. The tour was concluded with a symposium in Adelaide “South Australia’s past, present and future” at the Hawke Centre, University of South Australia.