Open to the Public! 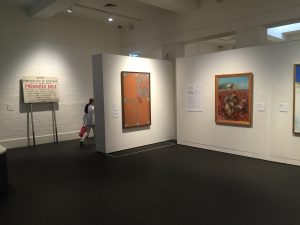 Black Mist Burnt Country opened to the public yesterday and had already a stream of visitors. It is receiving already good feedback with visitors commenting that the exhibition is “powerful” and “impressive”. Over 50 works across the mediums of painting, screen printing, photography, sculpture, new media and music give insights in the story of the British atomic tests in Australia and related aspects.

Among the highlights of the exhibition at National Trust S.H.Ervin Gallery are: Sidney Nolan’s painting Central Atomic Bomb, on loan from MONA is Hobart. The painting is the only known rendition of a mushroom cloud which Nolan added retrospectively to a work of his acclaimed Central Desert series while living in London in the second half of the 1950s. 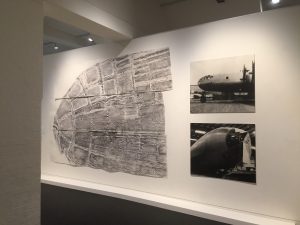 The other work is Ian Howard’s Enola Gay, on loan from the Art Gallery of NSW. The massive paper wax-rubbing of the front of the plane which dropped the atomic bomb on Hiroshima takes centre stage in the exhibition due to its size. The loans of these two seminal works are restrictive and both will only be on display in Sydney.

Installing the exhibition in Sydney