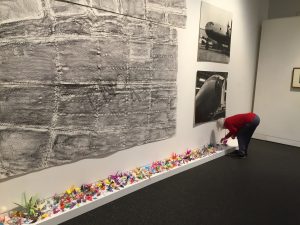 Grade 4 Students of Ashburton Primary School in Melbourne have created origami paper cranes for the exhibition. The cranes are presented in relation to water colour paintings in the exhibition by Albert Tucker and Lt Reginald Rowed, who both visited Hiroshima in 1946/47; and Ian Howard’s impressive wax rubbing of the Enola Gay, the B-29 Superfortress plane that dropped the bomb. Several hundred cranes are spread throughout the exhibition space, and visitors are invited to produce their own ones.

According to Japanese tradition the person who folds a thousand cranes is granted a wish. Origami cranes have become a symbol for the destruction of Hiroshima and Nagasaki in August 1945, and subsequently a symbol for peace, through the book “Sadako and the thousand paper cranes”. The popular children’s book was written by American-Canadian author Eleanor Coerr in 1977. It tells the story of Japanese girl Sadako Sasaki who lived in Hiroshima at the time of the bombing and suffered leukemia years later as a result of her exposure to radiation. Despite her sickness Sadako began to fold paper cranes. She died on this day 61 years ago.