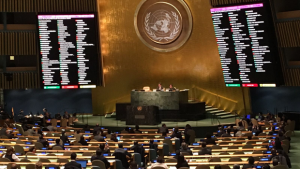 Negotiations are underway in New York at the United Nations to produce a treaty banning nuclear weapons. This is a historic moment. Disarmament experts and campaigners are confident that the legal loophole will be closed and nuclear weapons outlawed, which will provide an important legal framework and instigate nuclear disarmament in the future. In December 2016 an overwhelming majority of countries in the United Nations General Assembly adopted a resolution to commence these negotiations. 113 UN member stated voted in favour, 35 voted against and 13 abstained. Australia chose to vote against the resolution. Subsequently, the Australian government decided not to participate in the negotiations either. However, two Australians will be presenting their views at the UN: Sue Coleman-Hazeldine, a Kokatha-Mula woman living in Ceduna and Karina Lester, daughter of prominent campaigner Yami Lester, a Yankunytjatjara-Anangu woman living in Adelaide. Both will deliver a testimony on the impacts of nuclear testing on Aboriginal land and people in South Australia.

Both women’s travel to New York has been supported by ICAN, the International Campaign to Abolish Nuclear Weapons, one of several NGO and civil societies which are present at the UN to lobby for the ban of nuclear weapons. For more information visit http://www.icanw.org/campaign-news/negotiations/

BMBC Online Shop has been launched
Scroll to top