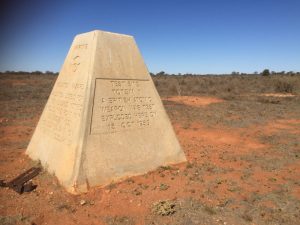 We mourn the passing of Yami Lester, a Yankunytjatjara man, who passed away this week on his country at Wallatinna, near Marla, South Australia. As a young boy he witnessed the effects of the Totem I atomic tests at Emu Field, South Australia, and subsequently lost his eye sight. Later in his life he became the ‘public face’  in the story of the British atomic tests in Australia and tireless campaigner for Indigenous land rights. He travelled to London to lobby the Government to take responsibility for the impacts of the British test program on country and people and to pay compensation. He was a key witness in the 1984 Royal Commission into he British atomic tests in Australia.

I came about his autobiography, and the story of atomic testing, when travelling outback Central Australia in the 1990s. It has been an honour and a great pleasure to have been able to meet Yami in the process of developing Black Mist Burnt Country. He was a strong supporter of the project. In the exhibition he features prominently with two photographic works, by Belinda Mason and Jessie Boylan, who both portrayed Yami Lester in quite different ways.

Our thoughts are with his family, and his daughters Rose and Karina, who continue the anti-nuclear campaign – most recently at the United Nations negotiations for a treaty banning nuclear weapons in New York, where Karina spoke on behalf of her father and for the Indigenous victims of atomic testing in Australia. The testimony reportedly had a huge impact. Subsequently, 122 nations adopted a treaty to outlaw nuclear weapons. A historical decision – Yami would have been proud and satisfied.