Due to unforeseen circumstances outside our control the Adelaide venue had to be scratched from the touring itinerary. We have been informed that the State Library of South Australia has not extended the lease for the venue, the City Gallery on North Terrace, which is occupied by the Flinders University Art Museum. This is rather lamentable as the Flinders University Art Museum was a strong supporter of the exhibition from the beginning and the only university museum to sign up for the exhibition. Beside, by nature of its topic the exhibition should be visiting Adelaide and the state of South Australia, where nine of the British atomic tests were conducted.

Unfortunately, a suitable alternative could not be found. We will be working with the management of the Flinders University Art Museum and looking into the options for a replacement event, perhaps to coincide with Adelaide’s Indigenous arts festival Tarnanthi in October next year. 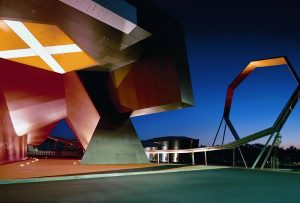 Fortunately, the National Museum of Australia in Canberra will present the exhibition. Talks with the Museum were underway for an extension of the tour, but we were lucky that the Museum was flexible enough to present the exhibition fro 25 August to 18 November 2018. So we will be in the nation’s capital instead of Adelaide, which is very exciting. We expect to develop an extensive public program in collaboration with the museum – watch this space.