‘Atomic Thunder: The Maralinga story’ has been awarded the PM’s Literary Prize for Australian History. Elizabeth Tynan, who is a James Cook University academic, also wrote an abbreviated version of the history of the British atomic tests in Australia for the exhibition catalogue. The award is a significant recognition of her achievement and follows the CHASS award which Liz received previously. 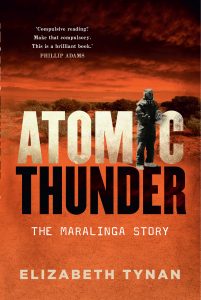 The judges for the PM’s Literary Prize commented:

“This book reveals new details about one of the most important stories in recent Australian history – the atomic tests by the British government in the South Australian desert at Maralinga in the 1950s. This well-executed work offers compelling and at times shocking information about an exercise that has been mired in secrecy and controversy for decades.

Elizabeth Tynan has produced a readable account, which mixes excellent knowledge of science and social and political history. The research is detailed and balanced and the narrative is well paced. Tynan is a clear writer and her tone remains confident yet curious throughout. The book shows an astute understanding of the Cold War context in which the tests took place yet does not avoid the betrayal of Australians by their political leaders nor the shameful treatment of the health and safety of Aboriginal Australians in particular.

Atomic Thunder is a book that speaks to Australian audiences and raises issues of government responsibility and transparency that continue to resonate today. It is an impressive work of history – a book that is long overdue and one that is likely to remain the definitive account of that period.”

Visit the shop section of this website to purchase your copy.