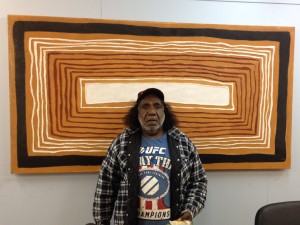 One of the central stories of Black Mist Burnt Country is the story of artist Jonathan Kumintjarra Brown. Jonathan was removed from his parents at Ooldea mission station at very early age and grew up with in a foster family in Melbourne and Sydney. At a later stage of his life he located his parents at Yalata and went back to be reunited with them.

The return to his people was traumatic. Neither could he speak Pitjantjatjara, nor did he know he had a brother. He learned about the removal of his people from their country and the destruction of country through atomic testing.
Fabian Peel, who worked as a nurse in the community at the time and is now director of Tullawon Health Clinic in Yalata, took Jonathan around the country. He remembers: ”It was very painful. Jonathan cried all the way.”

Jonathon went on to make several paintings depicting the impacts of the nuclear testing program on Anangu and the land, some of which will be included in the exhibition.