Yami Lester is a Yankunytjatjara man who reported a mysterious ‘black cloud’ travelling closely to the ground across the country and the Aboriginal encampment of Wallatinna cattle station after the first ‘Totem’ test at Emu on 15 October 1953.

His family and relatives became sick, suffering from vomiting, skin rashes and diarrhea. Yami himself became blind soon after. 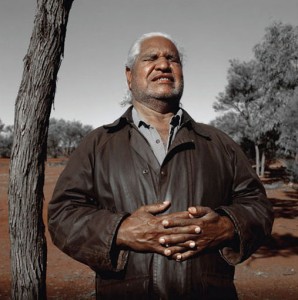 While the existence of the mysterious ‘black mist’ was denied by authorities, and any effect on people disputed, the accounts have been confirmed by white cattle farmers in the area. A black sticky residue was found on fruit trees on the farm, which soon after withered and died.

The Royal Commission into British nuclear tests in Australia found later that the test should not have been fired as weather conditions were not favourable. The atomic cloud did not disperse as expected and travelled in a north-eastern direction toward Wallatinna. The fall-out was three times the amount predicted.

In 1984 Yami Lester went to London as the head of an Aboriginal delegation to lobby the British government to take responsibility for the atomic tests and its consequences. He met with high-ranking British government officials and received assurances that the British would fully cooperate with the judicial enquiry set up by the Australian Government.

Yami also presented a submission at the hearings of the McClelland Commission into the British tests in Australia. His personal story is documented in his book Yami Lester – The Autobiography of Yami Lester (first published 1993 by Institute of Aboriginal Development).

Test area handed back to traditional owners
Scroll to top