In an official ceremony the Defense Department handed back to Maralinga Tjarutja the last parcel of land of the vast ‘Section 400’; the area where the seven atomic bombs where tested in 1956 and 1957.

“It’s a hurting history”, Keith Peters, Chairperson of Maralinga Tjarutja, told the handover ceremony in the presence of the federal defense and Aboriginal Affairs ministers at Maralinga airfield today.

Minister for Defense David Johnston said: “We acknowledge that the history of Maralinga has not always been a happy one. Maralinga people have endured much: their relocation from traditional lands to missions, like the one at Ooldea Well, in the early 20th century and the further displacement when the Commonwealth agreed to host the British Government’s nuclear test programs in the 1950s. 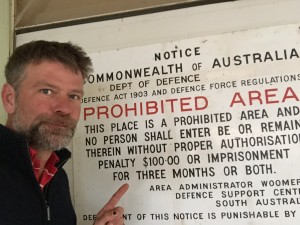 We acknowledge that for many of Maralinga Tjarutja’s older members, places within their lands like Section 400 continue to be strongly associated with destruction caused by the atomic tests and the death and ill-health of community members immediately afterwards and in the years following. There are many layers of history here for both Aboriginal and non–Aboriginal people. We do not want the Australian people to forget the history of this important place.”

Today’s hand-over gives traditional owners unlimited access, and it completes the return of lands where the British had established their permanent atomic test site in the 1950s. Section 400, a 3000 square kilometer area of contaminated land had been handed back to its traditional owners in 2009 after a 100 million dollar clean-up and rehabilitation operation had been negotiated with the British government as a result of the Royal Commission into the British nuclear tests in Australia.

Seven atomic tests had been conducted in the ‘forward area’ of Section 400 until 1956 and several hundred so-called ‘minor tests’ continued until 1963 when the Nuclear Test Ban Treaty came into existence. These tests had spread 22 kg plutonium and other highly toxic substances across a large area.

PM Tony Abbott sent the following message: “… On this day, the Maralinga Tjarutja people take back a responsibility they have had for thousands of years: the task of looking after their land for future generations. Today, we remove this area from the Defence test range so that the Maralinga Tjarutja people can manage it without restrictions for the benefit of the community. My hope is that this will be a unifying moment in our history …”