Burrinja Cultural Centre has been successful in applying for development funding from the Australian Government through Australia Council of the Arts’ Visions of Australia touring program. Burrinja Cultural Centre curator JD Mittmann is delighted that the touring exhibition can now be properly developed with the prospect of a national tour to be launched in September 2016 marking the 60th anniversary of the first British test at Maralinga. 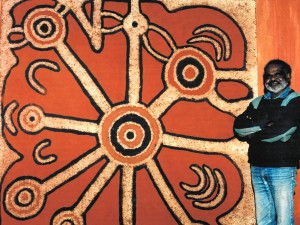 “This is the first exhibition of this kind in Australia. It commemorates an important event in Australia’s history that is not particularly well known and continues to have on-going consequences for land and people.”

Ross Farnell, Burrinja’s Executive Director, says: “It shows again, even small collections have relevance. Jonathan Kumintjarra Brown’s painting (Maralinga before atomic testing) in the McLeod Gift Collection, which Burrinja manages on behalf of Yarra Ranges Council, is an important work, and it has become the trigger for a national tour. That is exciting.”

The funding will enable for professional development of the exhibition and planning of the touring exhibition. Curator JD Mittmann says: “This is encouraging. It also means we can put together an exhibition which shows that art can address important issues. In particular a story of the First Australians which concerns all Australians.”