The prospect of visiting a former atomic test site causes a feeling of unease. Would it be safe? Could remaining radiation or radioactive dust particles harm? What to expect, what to see? While the site had been declared safe for temporary visits around 2000 signs erected every 50 metres around the 300 km area remind visitors and Indigenous people that hunting and eating game in the area is not considered safe. 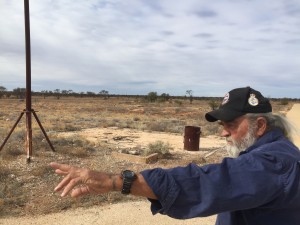 Robin Matthews, caretaker and guide provides an interesting and informative tour starting at Maralinga village, which is located on the top of the ranges about 70 km northwest of the Transatlantic railway at Watson and offers a superb view of the surrounding lands. At the height of the test program over 2000 people lived and worked at Maralinga. The Maralinga village, located over 1000km northwest of Adelaide in remote South Australia, hosted over 8,000 Australian servicemen and 22,000 British, over the entire eleven years the project was underway.

Only a few original buildings remain, some of which were used during the subsequent clean-up projects in 1967 and 1993-2001 respectively. The infrastructure of the village and airport established by the British in only 15 months speaks volumes of the scale of the atomic test program envisioned. Maralinga was to become a permanent site for an atomic test program for the next 30 years.

The airstrip with its 2.4 km long runway is the only emergency one in the southern hemisphere capable of landing an US space shuttle. The taxi area in front of the airport terminal served to collect what little rainfall the arid desert region has to offer but sufficient enough to provide for the entire camp.

The ‘forward area’ located 20 km north of Maralinga village leads across Tietken’s Plain to an area of over 300 square miles, established by the British as a grid of roads every 5 miles. Seven atomic bombs were exploded there within a radius of a couple kilometres in 1956 and 1957. Several hundred so-called ‘minor tests’ devastated an area of several square kilometres with plutonium, beryllium and other highly toxic elements.

An extensive clean-up operation was undertaken from 1993 to 2001 to recover the plutonium and rehabilitate the area. Radioactive debris left behind in pits by the British in 1967 (Operation Brumby) were treated by a process of in-situ vitrification (ISV), while top soil was graded and other materials including all machinery, earth moving equipment and vehicles were buried in an enormous pit 15 metres deep and 400 metres square.

Link: Maralinga tours can be booked via www.maralingatours.com.au
For more information on the Maralinga rehabilitation project visit: www.arpansa.gov.au/radiationProtection/RadioactiveWaste/maralinga.cfm
Or www.foe.org.au/anti-nuclear/issues/oz/britbombs/clean-up