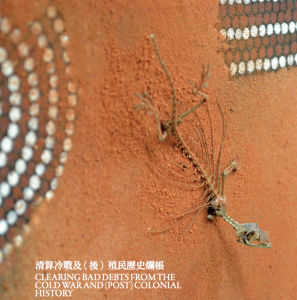 Recently, there has been also quite a bit of interest by international media, which is exciting and just displays how much the story of atomic testing is a global one. The Guardian UK dedicated a page in its print edition, stressing the relevance for its British readership and veterans in particular.
Turning to the Pacific where the French tested numerous atomic weapons until the 1980s: TV 1 New Caledonia spread news about the exhibition through a report produced by ABC International.

And finally, ARTCO, a Chinese monthly art magazine dedicated four illustrated pages to the exhibition. The glossy magazine (with an edition of 25,000 copies) is distributed in Taiwan, Hongkong and China. VICE Magazine (out of NYC), CC TV America (in Washington DC) and a Russian/Kazakh website all reported online as well at the time of the exhibition launch.